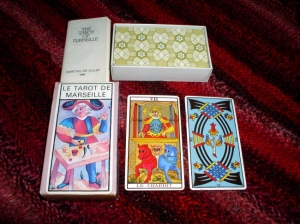 Weekend is here and I take out another deck, one that I haven’t used in many many years. The Fournier TdM was actually my very first tarot deck that I bought back in the late 1980:ies. I found it in a bookshop in Uppsala, but failed to find any tarot books so thought I might have to write one myself, so I got a pencil and a blank notebook, promptly named all the pages, 2 pages for each card and set about learning the tarot!

It does come with a strange little white booklet (LWB) that among other things names the physical areas that the cards could indicate, I discarded that information and just looked at the cards, did readings for friends and just chatted to and about them for a few years.

I also bought a few more decks, one RWS and a Herbal tarot and later a Hanson-Roberts. But all these years I kept the Fournier. So that is a bit of background. I will also be using the story cubes I told about earlier.

Today’s card is The Fool/Le Mat. Instead of going back to any books or old info stored in my head I simply decided to step into the card. Be The Fool. So I went for a walk, it’s a wonderful sunny but cold day. Just walk, what do I see, hear, feel, smell? (I can’t say I tasted much)

I saw the sky, paly blue with just a hint of white clouds near the horizon. I saw the sun low, just coming up. I saw white snow, soft like whipped cream flooding the ground, tracks – white on white, footsteps – white on white. I saw people smiling at me when I passed them, I saw neighbours and friends and stopped to chat a little. I saw dogs and I saw Charlie shadowing me for a bit of the way. I could smell the snow! And a motor running, someone passing me with a cigarett, a teenager with a bubblegum, someones woodburning fire. I could feel the nipping (not of a dog) but of the cold in my face and the warmth of the sun when I faced it. I could hear the constant tingling (not of bells) but of my own thoughts, that inner never-ending monologue. So I stop! Clear my mind, breath a bit and take the quite in.

The story cubes gave me lock/kåta (tipi) But I thought kåta cause doesn’t that Fool look like he is wearing sami colours? A kåta is a tipi but for sami people. The principle is the same, you wrap hides or canvas around a structure of long thin sticks, leaving a hole for the smoke in the top. The idea to put a lock on a dwelling like that is Foolish. It also made me think of this image I saw on Facebook the other day. It was a sign out on the lawn outside a house. The sign saying ‘This is a gunfree house’ and all the comment on how stupid that was, like it was an open invitation to burglars. When I piped up that it is extremly rare for anyone where I live to own a gun unless they are a hunter I got called stupid. I have to wonder who the Fool is though.

I am showing here how this image would look with no multi-language border, this is from Maya Britans site. A bit larger if you click the image. It wasn’t until I looked up the card from the New Tarot of the Aquarian age though that I saw what she is really holding in her arms. It’s not camping equipment at all! It’s not a blanket and some fire-wood. It is a blue-print plan and scrolls. Now that does make more sense. The idea here is that the Fool = The nameless-one is the recorder, the possibility of every man and as such is the creator of music, art, literature etc. A bearer of culture.

I see a spider over her head and waiting in the left corner is both a cat and a dog. The big melting sun looks like it is being born from a cave. The fool is naked, clad only in ideas.

I often feel like I have no plan at all, just drifting out to sea but in my little boat I got plenty to keep me busy. A discussion about age on a forum made me think about how little the me looking out of these eyes have changed, how I am still stumbling around trying to find my big bright GOAL in life. And how I bet when I am 70 I might still be looking for it. I got the things I need to stay happy though. I might never end up with a great career or a fat paycheck or a big family, perhaps I just keep rocking around in my little lost boat with my books and plays and other scrolls I pick up on the way.

Posted in Okategoriserade and tagged I am One, The Fool. Bookmark the permalink.

Inspired by Tarot Bonkers!  I decided to see if I could find my own favorite cards from my collection of decks. First card out – The Fool, is not really a favorite card at all. I never could connect much to it, see myself in this specific card. Of course we are all foolish! But The Fool seems to me to be so much more then that. Some intermingled sense of being child-like, innocent and curious, daring, but also driven, to have a passion. In life I been all those things, but hardly ever all at once.

In order the Fools I posted here are from: Tarot of the Spirit, Transformational and Fourniers TdM. I wanted to include the Fournier Fool mainly cause it was my first one 😀 This is my very first tarot deck bought in late 1980:ies and this was the first card I saw as I unwrapped the deck. It is the Essential Fool for me. Notice that we can’t really tell where he is walking, and neither can he of course. But we don’t see the abyss here, just a bum in a bumpy road. See, I could relate to this card back then, cause I was just like that, a bum on a bumpy road, no idea what I was gonna do, had no home, no money, no family or friends near-by. I was a student waiting in line to get a dorm-room in a new city. I spent my days reading thick novels and drinking cheap coffee. Crashing in sofas, getting drunk a lot, sleeping around. Somehow I got my shit together, got a dormroom, made tons of friends, did excellent in all my exams and so on. But I do remember being quite happy at my bum-phase too. I was happy being that fool. And I was happy finding this fool in that pack of cards.

The Fool to the left is from Tarot of the Spirit and I love it for the stepping out into the abyss/astral. This is my Dream Fool with a dainty purse too! Red rose for passion on the forward leaping foot, white rose for purity of purpose in the hand. I guess this is The Fool I aspire to become. The Dagaz Fool, standing between night and day. This is me Fooling around in the Astral in my dreams.

The Fool in the middle is the pretty little Fool. It is from Arnell Ando’s Transformational Tarot. I think really the cool thing about it that I love is the bubbles (that and the forest that looks like ferns or sea-weed makes me think of this as a little deep-ocean diver) and the female-headed owl. 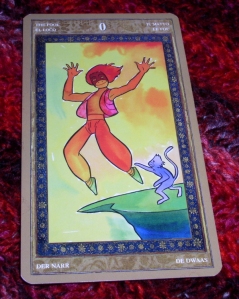 Yoga tarot places the Fool last of the major arcana as he is Samadhi and his state of being is the final objective, the Leap into Freedom. It’s about purity, perhaps of gaining control over your self and then relenting it absolute. The Fool here is pictured as a monkey. Next to humans, monkeys probably has one of the most structured hierarkies in the world. Is a monkey truly ‘free’? It seems they just live in a slightly differently ordered society.

Wikipedia describes Samadhi like this: ‘ Rather than thinking of “nothing,” true samādhi is said to be achieved only when one has pure, unmotivated love of God. Thus samādhi can be entered into through meditation on the personal form of God. Even while performing daily activities a practitioner can strive for full samādhi’

My yoga book also writes about how we can learn yoga from animals, looking how they move and how they are both focused in concentration and attention to the surroundings. Long before I ‘learned’ to meditate I did it freely while walking. It’s all in the purpose. To be fully in the moment, in the body.

Posted in Yoga tarot and tagged The Fool, Yoga Tarot. Bookmark the permalink.